We are excited to announce the start of two new monthly clubs, the TPC Movie Club and the Commons Community Book Club. And you’re invited to join in the fun! 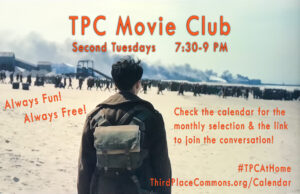 The first movie club meeting will take place on Tuesday, October 13 when the group will discuss “If Beale Street Could Talk,” a gorgeous film filled with powerful performances including an Oscar winning turn from Regina King. Beale Street is a heartfelt love story, based on the James Baldwin novel, that movingly explores themes of racial injustice and the power of family devotion.

Rotten Tomatoes gives the film a 95% and says, “’If Beale Street Could Talk’ honors its source material with a beautifully filmed adaptation that finds director Barry Jenkins further strengthening his visual and narrative craft.” Rated R for some sexual content and language.

Where to find it: You can find it free on Hulu with subscription, or rent/buy from Amazon, Apple TV, Vudu, Fandango Now, and YouTube. 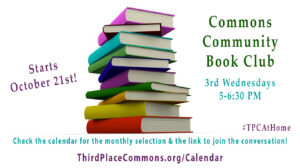 The first Commons Community Book Club will meet on Wednesday, October 21 with a discussion of the first club selection, “The Scent Keeper” by Erica Bauermeister.

A New York Times Bestseller and Reese’s Book Club selection, Kirkus Reviews describes the novel this way: “Told in a lyrical, haunting prose, the story provides fascinating information about the ways in which different fragrances can impact human behavior and the struggles of finding one’s own identity. An artfully crafted coming-of-age story that will take the reader on an exquisite olfactory adventure.”

This first selection is a quick read, so you’ve got plenty of time to read it and be ready to chat on 10/21. Learn more and order your copy (from our neighbors at Third Place Books) here.

These selections and the future direction of each club have been directly informed by community input. In late August, Third Place Commons launched a survey to gauge the interests of potential participants and find out what kinds of club content would best meet the needs of the community. The survey received strong response and provided great insights into what folks most wanted from their book and movie clubs.

Here’s a quick look at some of what respondents said they wanted.

Commons Community Book Club
For those interested in a book club, current & recent bestsellers were by far the most popular category of books, with mysteries and award-winning literature also popular selections. So that’s what the club will focus on – critically acclaimed bestsellers from the past few years, with occasional mysteries and older gems mixed in.

While respondents said they like reading paperbacks and hardcovers equally, more than half would prefer to buy paperback. Therefore, most of the club’s selections will be books that are already out in paperback, though many folks also said they’d be getting their selections from the library or in audio or digital format.

TPC Movie Club
Movie club responses were equally enlightening. Nearly half of respondents said that “all movies” were their preferred category, with “award winners and critically acclaimed films” coming in a close second and strong interest as well in “oldies, but goodies” from the 80s, 90s, and 00s.

Four out of five people indicated they watch movies on Netflix and Amazon, but even more said they were happy to pay to rent movies (or go to the movies when the time comes) if it’s not available for free on their streaming service of choice. So selections will be made that are widely available to everyone, either free or to rent, rather than films only available to subscribers of a single service.

Folks were not overly concerned with seeing only new movies (especially since there aren’t many of those right now). As a result, selections will run the gamut, focusing mainly on critically acclaimed films of the past 5 years, with occasional widely available new releases and dips back further in time for well-loved favorites.

There was also a fair amount of interest in clubs focused on specific topics like classics, black voices and stories, LGBTQ+ cinema, and independent art house movies. So additional special focus clubs may roll out in the future. (Interested in leading a group in one of these areas? Email [email protected].)