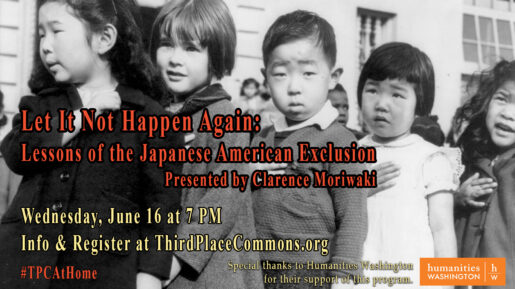 On Wednesday, June 16th at 7 PM, join us for “Let It Not Happen Again: Lessons of the Japanese American Exclusion” to learn more about this critical juncture in our local history.

During the program, speaker Clarence Moriwaki will share the story of Bainbridge Island—the origin point of the Japanese American exclusion—to provide a human, historical account of this national tragedy, and to ask the question, “Are there parallels to what’s happening in America now?”

Moriwaki uses historical images, including historical and current propaganda, to explore the fear, racism, and failure of political leadership that led to these unconstitutional actions during World War II, and why we must not let it happen again.

This program is part of Third Place Commons’ ongoing TPC At Home virtual programming, providing opportunities both to learn and to engage with your community. Coming up are parts two and three of the Commons’ “Going Green” series. On Saturday, June 19th at 11, it’s “Green Gardening with Master Gardener Julie Yasny,” and on Wednesday, June 30th at 7 PM, tune in for “Keep the Cycle Turning: How to be a Savvy Recycler.”

Check the Third Place Commons online calendar for more details on all of these programs plus all the weekly and monthly offerings coming up including book and movie clubs and weekly foreign language conversation groups in German, French, and Spanish. We’d love to have you!