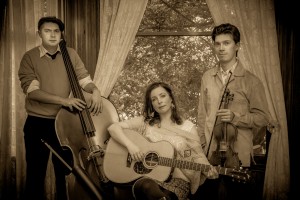 Here comes the weekend!  And I bet you’re curious what to expect on the Third Place stage. Keep reading to find out!

The Blackberry Bushes have that rare magic that allows them to artfully fuse sounds from many genres into a string instrumentation that retains distinct threads of sonic color. This is a daredevil sound that is delicate, bold, and like their thorny namesake, rooted and growing, growing, growing.

The Appalachian Mountains are the oldest mountains in the world, and the Mississippi River is the most musical river ever known. Jes Raymond and Jakob Breitbach may have met in the rainy bottom of the Puget Sound, but their music is vibrantly infused with the essence of the homes they wandered west from. Joined by Bay Area native, Julian Stocking on the upright bass, The Blackberry Bushes are a bluegrass trio who draw from these deep roots of American traditional music to create a playful and resonant sound with both twang and sophistication.  Joyful singing and enchanting songwriting are supported by carefully constructed soundscapes that feature virtuosic fiddle and bowed bass.

Cara Francis is a jazz vocalist who sings standards and modern classics, from groups such as the Carpenters, Petula Clark and Rickie Lee Jones.

Cara’s life changing collision with jazz began in 2004 when she was persuaded to go to a jazz club in Tacoma to hear a friend play with a big band whose featured singer was Seattle’s amazing vocalist Greta Matassa.

“I was hearing the most amazing bunch of musicians I‘d ever heard…playing the most amazing music I’d ever heard. That moment of energy and complexity, the wit and artfulness of the phrasing, the creative challenge of performing improvised music in collaboration on the spot—the very swing of the thing—turned my head around. Jazz had busted into my life unannounced, dropped its suitcases, and moved in.”

Weekend music in the Commons begins at promptly 7:30 and is always FREE and open to the public.

Come a little early to grab a table and some dinner. The Commons fills up fast!