On Friday night, and new to the Third Place stage, these kids from Roosevelt and Garfield High Schools will share with you their stellar chops.  Box’n’Biz is guitar, bass, drums and sax.

Owen “Box” Boxwell is a guitarist and co-founder of Box and Biz Jazz. He began playing rock guitar at the age of 8. He practiced guitar several hours a day and quickly became a technically advanced player. He fell in love with jazz when he heard Bill Evans’ album “Explorations”. After a year of playing jazz he was accepted into the Senior Jazz Band at Hamilton International Middle School. He was soon winning outstanding soloist awards at many different jazz festivals including University of Portland, Clark College, Bellevue College, and Lionel Hampton. He is currently a student at Garfield High School. An original and spontaneous player, he is always exploring new sounds and his many influences include Joe Pass, McCoy Tyner, Barney Kessel, John Coltrane, Tal Farlow, and Bill Evans.

Ben “Biz” Feldman is a bassist and co-founder of Box and Biz Jazz. He began playing guitar at the age of 11, switched to bass at the age of 13. He fell in love with jazz when fellow band mate Owen Boxwell played him Joe Pass’ album “Virtuoso”. After playing upright bass for a few months, he was accepted into the Senior Jazz Band at Hamilton International Middle School. Six months later, at the age of 14, he received the Leroy Vinnegar Musicianship Award at the Mel Brown Jazz Camp in Oregon. He also arranges for many different ensembles, and his arrangements have been featured at numerous jazz festivals including Lionel Hampton. He is currently a student at Garfield High School. 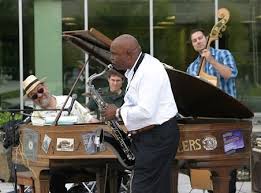 Always a Third Place favorite, Two Scoops combo will Boogie-Woogie the night away on Saturday evening.

Eric “Two Scoops” Moore has been playing the piano since the age of 5, growing up in Boston. As a teenager, he jammed with many “Blues Old-Timers.” He spent 7 years touring and recording with “Earring” George Mayweather, a harp-playing contemporary of Little Walter’s. For 6 years, Eric played with ex-Muddy Waters guitarist, Luther “Guitar Junior” Johnson, at clubs and festivals in 36 states, 12 countries on 3 continents.

Since 1996, Eric has been based in West Seattle, leading Two Scoops Combo He has released 8 critically acclaimed CDs. The Washington Blues Society has honored him with 6 awards for piano playing and 2 for songwriting, including 2013. He writes some of the funniest and most mouth-watering lyrics you’ve ever boogie-woogied to! Eric’s songs are included on 2 of CAR TALK’s music CDs and have been played on their NPR radio show for 3 million listeners. Eric’s hit song “Big Buffet” has gotten steady radio play for over 18 years!

Music in the Commons is FREE and open to the public.  Every Friday and Saturday night we bring you the best music for dancing and listening from Seattle and the Northwest.  Come early to grab a seat and some dinner.  The Commons fills up fast!

Previous Post: Start the week with music in the Commons